A downloadable game for Windows

It's Cricket. But better, more American, more exciting. The bowler tries to hit the furry thing with the ball and blow the sucker up. Batman tries to stop him and scores runs by hitting the boundaries and the fielders. You lose runs if the wicket gets hit when the ball stops moving, play resets.

You're the Batman. Hit SPACE to let the bowler know you are ready, use WASD to walk around (you can't move too far from your starting area), hold LEFT CLICK to charge your swing, release to swing for the boundaries. Bounce the ball off the field-fools, hit it as many times as you like. You've got 11 balls to score runs, good luck.

The year is 202X. Post Brexit-Britain is in turmoil. The country is divided, demoralised, and flat broke. In an effort to raise some much needed funds for the treasury, the Queen reluctantly agrees to put the game of Cricket up for auction. Cue mass debate about whether the Queen of England has that power, a minor riot in Australia, a major strike of outsourced workers in India, and a tense diplomatic standoff with Pakistan. The Minister for Culture, Media and Sport resigns in shame... but the auction goes ahead.

The bidding itself is to be hosted at Sotheby's in London, in a major coup for the auction house. American and Russian oligarchs, Chinese CEOs, Middle Eastern royals and European aristocrats fill the hall.

The Queen herself is in attendance, the national anthem is sung by a group of local schoolchildren.

"What the hell did I just buy?"
"Cricket, sir."
"What the hell is that?"
"It's a sport, sir."
"Ah great, I love sports. How does it work?"
"Well, the bowler tries to hit the Wicket, and knock the bails off the Stumps."
"Knock a Wicket off a stump? What's a Wicket? Sounds like a small furry goblin."
"Well, then the Batsman has to defend the Wicket."
"Ah, Batman. Now you're talking, everyone loves Batman."
"Err, well..."
"How many players?"
"Eleven on each side, sir."
"Eleven's a good number for sports, there should be only one Batman though."
"I'm not sure that would work, sir."
"It's my sport. I'll do what I want. I just want to see the Batman knocking the heck out of some guys to defend the goblin."
"Oh my."
"How long does it last?"
"Well the one day version is traditionally 300 balls..."
"300?! No one will stick around for that, they can have eleven. Eleven Balls, Eleven Players... perfect."
"This is awful..." 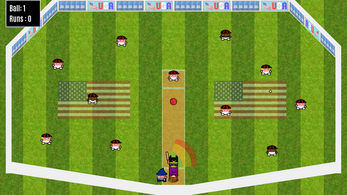